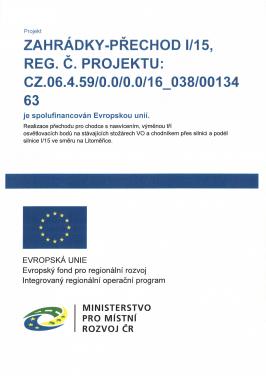 The first documentation of the town is from 1376. Under construction from 1547 to 1550 was the Renaissance chateau, later rebuilt in the Baroque style. Included in the manorial park during the 19th century was the rocky canyon of the Robeči brook, known as ‘Peklo’ (Hell), now a national nature reserve (a high concentration of spring snowflakes), along with the Wallenstein linden alley (300 years old) leading to one of the oldest pheasant parks in Bohemia, now a breeding range for wild goats and moufflon sheep.
The chateau was damaged by a fire in January 2003 and is now undergoing reconstruction.
Other points of interest are the national nature reserve of the New Chateau Pond (Novozámecký rybník) with rare species of birds and a unique outflow channel carved through the cliffs, the Church of St. Barbara from 1550, a statue of St. Starost from 1705 and the “Mnichov Gorge”.
In the town itself are many examples of half-timbered folk architecture. In the nearby village of Karba there is, in addition to half-timbered buildings, a rail viaduct 209 m long from 1898. The Zahrádky area has been declared a landmark zone, and is a point along several hiking and cycling trails.
Romantic admirers of picturesque natural scenery and pilgrims along the traces of past glories found this region a true gold mine from the early 19th century onward.
The ruins of ancient fortifications, such as Rybnov, Jiljov, Vítkovec and Vřísek, are wrapped in many a myth and legend. The remnants of the castellated manors of Sloup, Jestřebí, Děvín, Ronov and Starý Bernštejn have made many an appearance in popular historical literature, which brought them many excursions of the once-fashionable ruin-bibbers in search of medieval memories. And none of them has ever been disappointed by the potential for the picturesque contained in the Česká Lípa region.
Hunters and naturalists alike find much to delight in the calm surfaces of the many ponds, in whose outlying reed-banks many rare species of birds make their nests.
Hikers take pleasure in traversing the strange cliff valleys, or climbing the hills of Vlhošť, Ralsko, Kozel, and Tlustec, which enchant the eye with the magical view of an exceptional landscape, and meadows alive with a colourful panoply of blooms.

All of these factors make the Česká Lípa region a popular tourist destination.